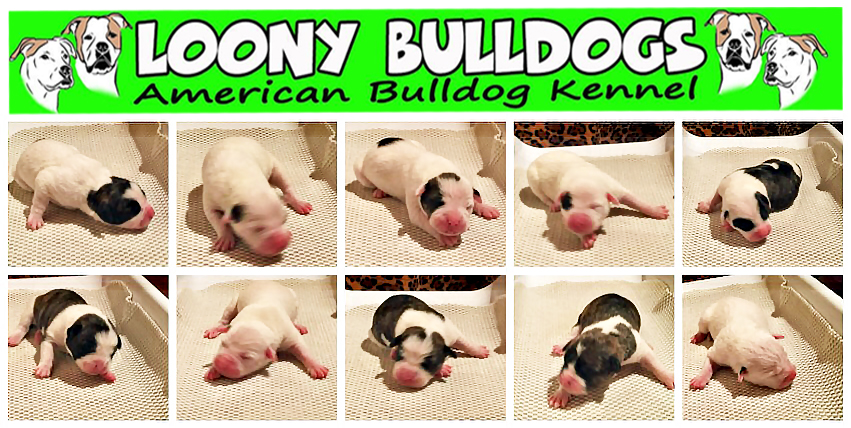 We have ten puppies (4 males and 6 females) of our mating of Loony-Bulldog's Penny and our US import and "CH Kadan's Bluegrass Boogie" - son Otaktay's Bloody Bill.

Both dogs are HD ED OCD and spondylosis -free as well as ichthyosis -and- NCL 0/0.

From this combination we expect healthy, sporty, perfect character free, open standard puppies.
The puppies grow up in our family and in our pack, be influenced by good faith and with NKC papers, microchipped, vaccinated and dewormed delivered aged earliest 8 weeks.

Reservations can be accepted by fee only. We ship worldwide except USA. There you should contact our partners Randy and Colten Matthues (Otaktay's American Bulldog).

Here to breed enthusiasts nor the precise origins of the two dogs:

Bill has not been used for breeding in Europe, so we may speak of an exclusive mating.

Bill is an US import, will live for about one year with us and will be trained by us. He is not too tall pure standard male who brings an excellent bone strength, pronounced muscles, very good pigmentation and a very open, social temperament. Only the angulation of the hindquarters is something to just get him. His gait is unique. He's with us since the end of march 2016 and we have since developed excellently. He could easily be integrated into the existing pack, showing great joy at work. Bill is a rather stubborn representatives but well over prey such as ball or tug can be motivated. Feed is of limited use in the training.
Bill is a thoroughly honest and open dog, which is every man and conspecifics open towards. A real "Mister charming". He loves to work on the training field as well as the extensive romping with other dogs. At the same time he also enjoys the common cuddling on a couch and being stroked, for which he gladly thanked with copious kisses.

Penny is a long-legged, graceful pure standard bitch. She has the optimal height, very good angulation and also a beautiful gait. Your only it lacks pigment in the head area, especially around the eyes. Even she's working like hell the muscles aren't that visible. In character is Penny Bill in every way. She's a real sunshine, open and socially and really knows every, whether human or conspecific to wrap the finger. She is "Everybodys Darling". Penny has a very lively temperament and also calls like to work. She works a lot and is to motivate both of food as well as toys. Also loves extensive rund and catch games with conspecifics while also extensive cuddling on the couch with lots of pats.

Since both dogs were health topp evaluated, both have an excellent character, we decided on this litter.
We hope from this mating healthy, athletic and temperamentally impeccable standard puppies, a good mix of these two wonderful dogs.